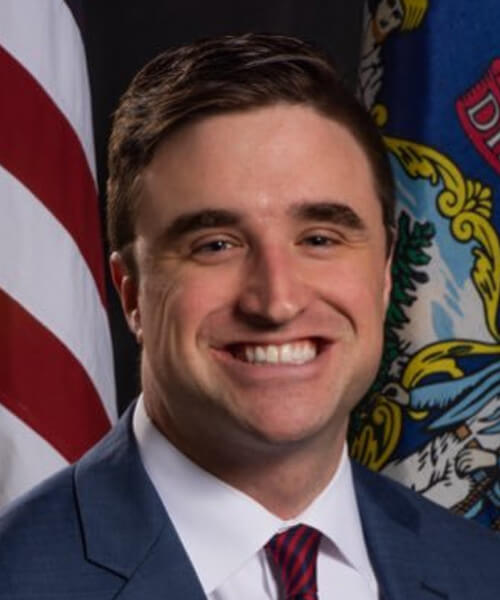 In 2018, Henry Beck was elected by a Joint Convention of the 129th Maine Legislature to the Office of State Treasurer. Treasurer Beck's priorities include prudent cash pool management, protecting the earned benefits of Maine public workers and educators, and completing bond sales and public-private partnerships for the common good of all Maine people.

Treasurer Beck's government service began when he was elected to represent his neighborhood on the Waterville City Council in 2005. In 2008, he was elected to the Maine House of Representatives representing parts of Waterville and Oakland during his senior year at Colby College.  In the Legislature Beck authored nearly one dozen bipartisan bills that became law on issues from pharmacy audits to infant heart screening to Maine's overdose medicine act. Beck was appointed House Chair of Joint Standing Committee on Insurance and Financial Services and to serve on the 2011 Commission to Apportion Maine's Congressional Districts.

Beck attended the University of Maine School of Law and graduated on time while serving in the Legislature. As an attorney in private practice, Beck represented Mainers and businesses involved in complex business disputes, serious criminal charges, insurance matters, and tax litigation. In 2018, Beck successfully argued an appeal before the Maine Supreme Judicial Court.  Beck also holds a Certificate of Graduate Study from the Muskie School of Public Service.

Treasurer Beck's family came to central Maine nearly one hundred years ago and started a roofing company that is still operating. He is not the first Treasurer with Waterville roots, serving after Treasurers Sam Shapiro, David G. Lemoine, and Bruce L. Poliquin. Treasurer Beck is a George J. Mitchell Scholar and serves as an adviser to the American Legion Dirigo Boys State program.