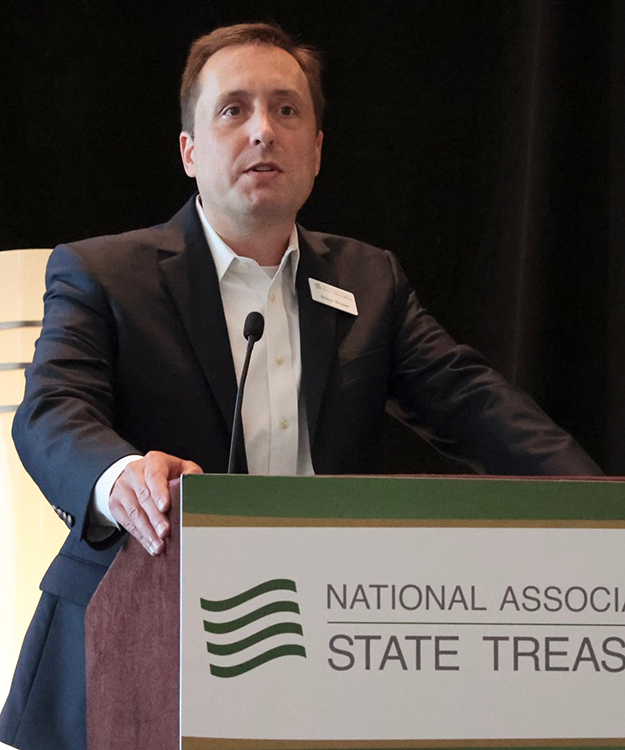 Shaun Snyder serves as the Executive Director of the National Association of State Treasurers (NAST) and the NAST Foundation. NAST is the bi-partisan organization of elected and appointed state and territorial Treasurers across the United States and membership also includes their staff (over 10,000 employees) as well as over 100 corporate affiliate members. NAST members serve as state chief financial officers, overseeing over $3 trillion in assets under management. NAST advocates for responsible public finance measures on Capitol Hill and with regulatory agencies and provides education through its conferences and distance learning. Shaun leads all aspects of NAST’s staff efforts to support the membership, including operations, conferences and education, private sector engagement, and policy development and advocacy.

Before NAST, Shaun served as the Chief Operating Officer for the American Psychiatric Association (APA), with over 37,000 U.S. and international members. In that role Shaun reported to the CEO and was responsible for working across all APA departments and 200 employees as well as with stakeholders to ensure that the organization met its strategic objectives, including advocacy, education, and ensuring member value. Shaun directly supervised APA’s Publishing organization, human resources, administrative services and facilities, information technology, meetings and conventions, and association governance.

Prior to the APA, Shaun served as the Chief Operating Officer for the Washington, D.C. Department of Health, which uniquely serves as both a state and city health agency, employing nearly 700 staff and with a budget of $265 million. Shaun also served as the administrator of the addiction agency serving over 12,000 patients per year. Prior to his departure, Shaun was appointed Interim Director of Health by the Mayor. Shaun also served as Special Assistant to the General Counsel of the United States Department of Housing and Urban Development and as Legislative Counsel and Counsel to the Committee on Health at Washington, DC’s City Council.

Shaun received his undergraduate degree in Government and Politics from the University of Maryland, his law degree from the Georgetown University Law Center, and his MBA from The George Washington University. He is licensed to practice law in Maryland and the District of Columbia as well as before the U.S. Supreme Court and possesses a Certified Association Executive (CAE) designation from the American Society of Association Executives (ASAE). Shaun served as the Treasurer of the D.C. Bar, which is the largest mandatory bar association in the United States and served as Treasurer of the D.C. Bar Pro Bono Center. Shaun and his wife, Grace, live in Washington, DC.